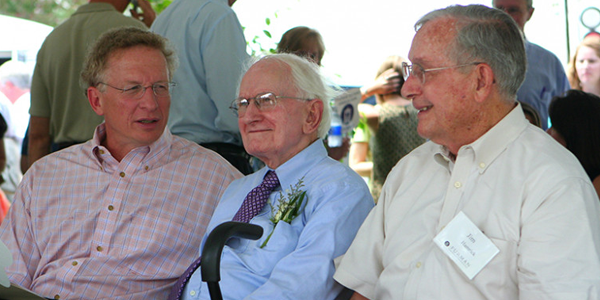 In late 2018, Furman University received a $6 million bequest from the estate of the late Thomas Farmer, a 1950 graduate who was among Furman's most ardent supporters.

Farmer, who died in 2014 at the age of 90, gave Furman a total of $3.8 million during his lifetime. The bequest from his estate brought his total giving to the university to nearly $10 million.

"Thomas Farmer was a loyal alumnus and one of Furman's most generous supporters," Furman President Elizabeth Davis said. "He gave much to the university during his lifetime, both in terms of his time and his financial resources, and this bequest is another example of his amazing generosity. It also demonstrates the power of planned giving, and how it can provide a lasting benefit to our current and future students."

A portion of the bequest supports the Thomas Spann Farmer Endowed Scholarship and the Christina Farmer Waring Endowed Art Scholarship. Both scholarships support Furman's Partners Program, which allows scholarship donors to personally connect with students who benefit from their philanthropy.

The bequest also supports Furman's Office of Innovation and Entrepreneurship, which develops entrepreneurial leaders on campus-regardless of major or discipline-and fosters a culture of innovation.

Following graduation, Farmer spent a year at Furman as director of public relations. He then worked for Berlin Myers Lumber Corporation until joining Lowe's Companies, from which he retired in 1986. He opened the first Lowe's store in South Carolina.

He was also active with the Low Country Food Bank, the Rotary Club of North Charleston and his church, Bethany United Methodist in Summerville, South Carolina.

Farmer was a member of Furman's Advisory Council, a sustaining member of the Richard Furman Society, and an adjunct member of the Furman Board of Trustees Development Committee. In addition to supporting the Partners Scholarship Program, his financial contributions to Furman have funded the Elizabeth Young Farmer Commons Room in Johns Hall and Thomas Spann Farmer Hall, which houses the Office of Development.